Day one of Skinny Hippo - all liquid diet

2 weeks of Skinny Hippo - high fat calorie restricted - should be interesting to see how low I can go at this point. When I first started CrossFitting something like 4 years ago, my average weight was 190. Now my average weight is 210. I wonder what I'll look like if I get down to 200? We'll find out :)

First shake down - the next 48 hours should be interesting.

PS - I haven't been sick (except for a bit of food poisoning several weeks back) for a good long while. I think it's been over a year! Moving forward, if I suffer any illness, I'll post it on the blog. I truly believe that I have become immune to the majority of illnesses that abound. Knocking on wood! And in this particular instance, that is not a sexual reference in case you were wondering.
Posted by Garth Huckabay at 7:22 AM 13 comments:

Not a good day for Fran!  My shoulders were trashed from the overhead squats yesterday and I was dreading the pullups.

Got started with push jerks.  I was excited to see what I could accomplish with my recent new found strength and rounded the #'s up a bit, assuming a 100k max.  I thought about pushing it to 110k but figured that might be a bit extreme.

Fran was rough - knew I was in trouble from the get go. It's been a great week and I would have loved to set a new Fran PR but the deck was stacked against me for sure. My pullups completely fell apart half way thru the 2nd round. Finished 4:39 as compared to my last go of 4:36. Bummer!

Posted by Garth Huckabay at 5:44 PM No comments:

First thing this morning, I broke out the new jump rope determined to set a new double under PR in a minute. Just made 80. It's amazing how hard it gets in that last 15 seconds! Now I'm shooting for 85 - climbing the board. 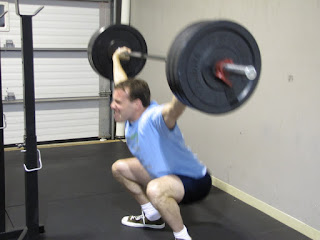 We got started with Overhead Squats. It had been awhile since we'd attempted any heavy weight but I knew that I was stronger so I assumed a max OHS of 95k.

I was determined to put up a solid # to give Pete and Matt a run for their money.  Finished 245 - the new rope really helped.  I was solid on the double unders.  Burpees were tough - thought I did strong on the box jumps.  I'll have to wait and see how the rest of the crew finished on this one assuming they were able to keep the count!

5 at 80k wasn't bad and I was excited to go for a new OHS PR and even more excited to get body weight overhead so I headed back out to the Fort at 4pm with that goal in mind. 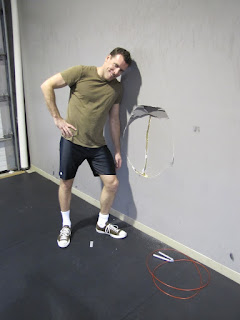 Tough luck!  I was a little to close to the wall and stumbled a bit warming up with 80k.  I survived but the wall didn't!  That is not a small hole :)

I moved away from the wall after that incident and loaded up the bar with 93.5k - approx 205lbs which is body weight for me.  Getting it overhead via a push jerk off the back was half the battle.  I went into the squat and was determined to nail it.  I didn't stand up fast but I did finish the movement before dropping the bar which is all that counts.  I'll go for 2 next time :)
Posted by Garth Huckabay at 7:08 PM 2 comments:

Bill, Jennie, Zach, Stephanie, Matt, Brittany, Bender, Deb, Ryan, Jason and I all headed down to Madison Wisconsin on Saturday morning for the Midwinter Meltdown indoor rowing competition.  There were a couple of large rowing clubs in attendance as was evident by the crowds of brightly colored singlets.  These rowers were scrawny!  Somebody should clue them in to the fact that lifting weights would absolutely improve their row performance.

Zach and Bender took a shot at the tandem rowing and made it look easy.  We saw several others give it a try and it's definitely a lot harder than it looks!

Jennie and Brittany had the first go at the 2000k row.  They both finished within a second of each other. 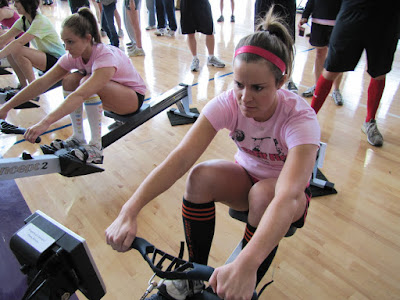 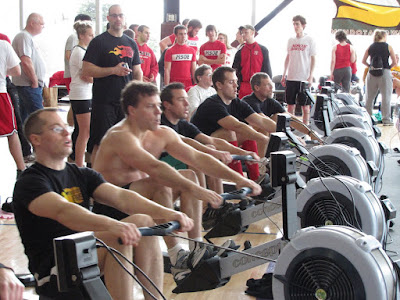 I took 2nd place in the Novice Men with a row time of 6:46.7 which was also a new personal record and new Fort record edging out Boyd's old time of 6:46.8 - nice!  Matt finished right behind me and took 3rd.  We both were trumped by an old czechoslovakian guy who didn't seem to speak much english.  He pulled a 6:41 and made it look easy.  After the row, I immediately started to cramp up and took at least 10 minutes to recover.  It just about killed me!

Bill, Zach, Bender and I teamed up for the men's relay race and took first place. 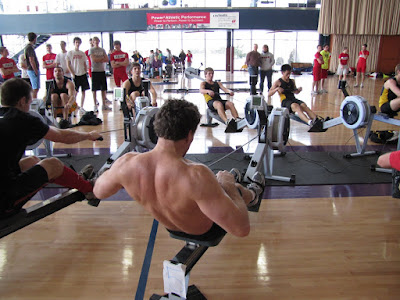 Bill put together a couple of coed teams as well.  Team 1 included Jennie, Brittany, Matt and Zach.  Team 2 included Stephanie, Deb, Ryan and Jason.   Both teams did great and team 1 took first in the coed team relay.
I have to wonder what all those rowers thought of our group.  We cleaned up!  Check out all the medals :) 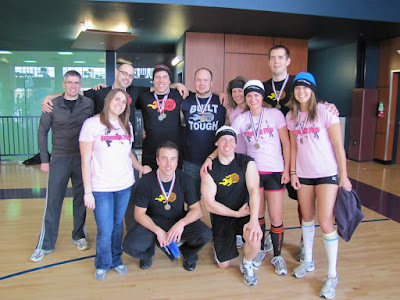 I figure Bill had me in mind for this one - OH walking lunge practice was just what I was looking for!

The WOD was interesting

My rows were a bit disappointing during the WOD.  I pulled a 1:29 on the first row and 1:48 on the 2nd - slow!   I only took a couple of rests during the walking lunges - out of necessity when I couldn't stand up out of the lunge.  Otherwise, I was a lot stronger with these.  I've typically tried to control the lunge to touch my knee to the ground but that takes a whole lot of effort.  This go around, I figured what the hell and bounced my knee of the ground.  It would have really hurt on concrete but wasn't too bad on the rubber mats.  Whatever gets it done!
Posted by Garth Huckabay at 6:51 AM No comments:

My single rep max is currently 95k but I know I've got more than that - just haven't taken the opportunity to go after it recently.  So I upped the loads just a bit and rounded up the weight - didn't say anything to Zach because I knew it would stress him out.  He might even make me do burpees!  :)

I was planning on repping out 5 at 90k but catching that weight on my chest was brutal and on the 3rd rep, I lost my balance bringing it down out of the press and dropped it to the floor.  Regardless, 90k wasn't too bad - I figure I have a 105/110 jerk easy!   I suspect we'll see a max effort in the very near future.

I was a little worried about the pushups since they've been my achilles heel of late but the WOD went well.  I was able to rep out all the movements more or less unbroken.  I lost my rythm a couple of times on the sumos and box jumps but never really stopped moving.

Finished 5:53 - Pete finished later in the day at 4:55.  Thought I might have had him on this one - no such luck.  I expect maybe he transitioned between movements faster - that could have made the difference.  I usually spent a few extra seconds setting up on the sumos.  I'll be curious to see how Matt finished.
Posted by Garth Huckabay at 5:31 AM No comments:

3 single rep attempts each of
Back Squat
Press
Deadlift

2 x PRs in one day - exciting!  I probably should have gone heavier on the back squat.  I've lost my log book and didn't have my previous PR with me.  If I'd known it was 130, I would have been more aggressive.

Press - 64.5k - disappointing - didn't have it this morning when it came to the press.

Deadlift - 200k PR - easy!  I thought I had more in me but when I added 10k, I couldn't move the bar.  I stepped it back to 205k and failed again.  It seems that those heavy deadlifts take just about every ounce of strength out of me on the first go around.  I'll go heavier on the first attempt next time - 210k!

Websites Worth Checking Out